Investigation: Is the President a Complete Moron?

While the attention of most of the media outlets in America over the next several weeks and perhaps months will be the impending impeachment against President Donald Trump, this recognized a need for a look at the Trump Era in American politics from a different angle entirely.

Surely, it’s entirely possible that Mr. Trump has committed enough impeachable offenses to be removed from office. It’s also very possible, given the partisan makeup of the Senate, that even if Articles of Impeachment are passed and adopted in the House, Mr. Trump could be acquitted in the Senate. It’s a high stakes Constitutional crisis that this country has only faced less than a handful of times in its history.

But we wanted to know something far more basic. We wanted to be the first, and probably only outlet, to finally answer the burning question about the Trump administration that heretofore no one has been able to answer concretely.

However, it’s a question our editorial board believed must be asked, and so we conducted an exhaustive investigation over the course of a few hours, and we believe we can finally answer this burning, incredibly relevant question:

It’s hard to argue that Mr. Trump isn’t a moron in some capacity. He quite frequently says and does things that morons do. But the question at hand is whether he is a complete moron. And that requires us to look at a few, key moments in his life, both in the political arena and out of it. These moments are the basis of our hard hitting, prolly award winning journalistic effort here.

Back in 1989, when Mr. Trump was still just an alleged billionaire businessman and all-around butt of jokes, he took out an ad in The Failing New York Times demanding that five black men be put to death. While many Americans wouldn’t bat an eyelash at President Trump saying such things, given his desire to make sure the “very fine people” marching with Nazis exist, and that he’s literally told brown women to go back where they came from, but back in 1989 it was a stunning thing for him to do. Why? Because the five men, who had been convicted of rape, had already been exonerated, and Trump was, essentially arguing for them to be put to death anyway, to make scared white folks feel safer.

This begs the question, what kind of person would do such a thing, to insist five innocent men be executed for a crime they didn’t commit? The answer is, according to our research — a racist moron.

Mr. Trump’s rise to prominence on the political stage was fueled by his behavior as the richest, loudest voice of the “Birther” movement. In short, Birthers believe that former President Barack H. Obama was born in Kenya and has been hiding his true birthplace from the American public. Despite the fact that Obama’s birth status was never in question from reputable outlets and sources, Mr. Trump pushed the racist conspiracy theory for several years, and then tried to claim he “settled” the issue by talking about it so much.

In our investigations, we found that someone continuing to push a racist conspiracy theory is a complete and total moron.

HE STARED AT AN ECLIPSE

During the first year of his presidency, there was a solar eclipse. Most people who want to observe a solar eclipse do so using special devices that protect their eyes, because most people understand staring at the sun is a great way to cause insane damage to your eyes. But, that wasn’t the case for our Dear President. He knew, deep in his artery hardened heart, that all that stuff about not staring at eclipses is fake news. So he stared right at that eclipse. 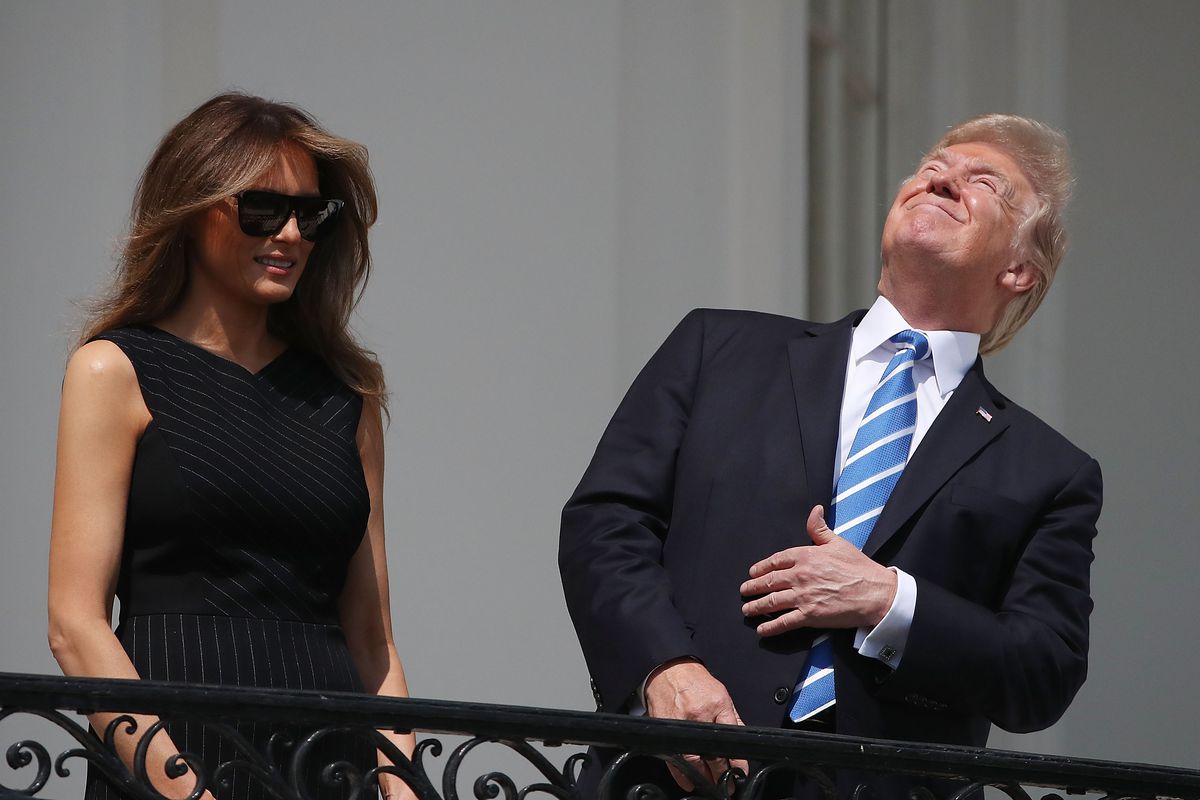 Staring at the sun is pretty much the definition of moronic behavior.

Trump’s hostile, combative, rude, and insulting posture with the media is nothing new. He has battled hard and personally to maintain whatever he thinks is is reputation. Becoming president didn’t stop any of that. One day, when trying to elicit pity for himself and his administration, Trump tweeted about “negative press covfefe.” We can presume that he might have meant “coverage,” given the context of the tweet. However it was deleted, and Trump’s ego has legally barred him from discussing any mistakes he’s made since the late 80’s.

HE DOESN’T GET HOW TARIFFS WORK

Mr. Trump keeps telling the American people his trade war with China is a good thing. Mainly, he argues, it’s because billions of dollars in tariffs are being exacted on Chinese goods imported into America. He claims that means America is making billions from the tariffs. However, that’s literally not how tariffs work, and ultimately the cost of the tariffs is passed on to U.S. consumers. Trying to make someone believe in 2019 that tariffs aren’t taxes is pretty moronic.

HE WANTED TO NUKE HURRICANES MORE THAN ONCE

Mr. Trump seemingly has forgotten that he’s presided over three Category-5 hurricanes during his presidency, because he acted like he’s never heard of them before, recently. But it’s not forgetting about CAT-5 hurricanes that makes one think he might be moronic. It’s the fact that on more than one occasion, Trump pressed Pentagon and weather service officials as to why America couldn’t simply launch a nuclear strike on a hurricane. In fairness, others have wondered this, but since the late 1950’s it’s been a debunked idea.

Not getting what fallout is, and thinking you can nuke a hurricane makes it hard to argue you’re not a moron.

HE WANTS TO FUCK HIS OWN DAUGHTER

HE THINKS “LIDDLE'” IS A WORD AND APOSTROPHE IS A HYPHEN

Mr. Trump claimed once famously to have “the best words.” We can presume he meant to boast about his vocabulary, but didn’t have the vocabulary to articulate the word, “vocabulary.” But over time, we’ve come to notice pattern in Trump’s literacy — that pattern being that he’s not very literate. At all. In fact, Trump’s grasp on the English language is so terrible, it’s on this list twice. Just in the past two days, he’s gotten in a fight with one of the men leading his impeachment investigation, Rep. Adam Schiff.

Liddle’ Adam Schiff, who has worked unsuccessfully for 3 years to hurt the Republican Party and President, has just said that the Whistleblower, even though he or she only had second hand information, “is credible.” How can that be with zero info and a known bias. Democrat Scam!

Then, apparently Trump got pretty upset that media outlets would dare to accurately reprint his tweet and say he misspelled the word “little.” The most powerful whiny bitch in the free world took to Twitter to blast CNN and others for stating the truth about what he tweeted. Then, he piled onto his self-owning by misspelling “describe” as “discribe.”

To show you how dishonest the LameStream Media is, I used the word Liddle’, not Liddle, in discribing Corrupt Congressman Liddle’ Adam Schiff. Low ratings @CNN purposely took the hyphen out and said I spelled the word little wrong. A small but never ending situation with CNN!

Share
Facebook
Twitter
Pinterest
VK
WhatsApp
Previous article
Man Strikes First Blow in War on Christmas Putting Up His Lights on Halloween
Next article
Trump: UFC Crowd Was Booing Hillary Clinton for Not Showing Up For Them to Boo Her